It Takes a Team 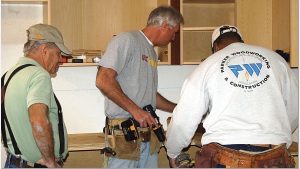 Those were the words that kept falling out of my mouth as we walked the debris-strewn streets of the Lower Ninth Ward several months after hurricane Katrina hit the Gulf coast and found its way into the national archives as one of the largest natural disaster in U.S. history.

I was part of a team that my church sent to come alongside our friends at New Life Church in New Orleans to help rebuild the homes of some of their members. While I have many enduring memories of that trip, the most memorable came in an unanticipated manner.

On our second day of construction, I found myself assembling Home Depot  kitchen cabinets on the cold, concrete floor of one of the homes that had been rampaged by the recalcitrant flood waters that breached the levees. A short while into the project, I was introduced to the family who was living in a FEMA trailer while their home was being rehabilitated. A few minutes later, I noticed a member of the family, 10-year-old Andre, watching every move I was making, fascinated by the squeal of my 18-volt cordless Makita power drill.

Wired like any other 10-year-old, Andre wanted in! The moment I asked him if he would like to help me, his eyes lit up like a Christmas tree. For the next few hours, Andre and I together assembled the cabinets that would soon hang in his renovated kitchen.

As I think back on that day, I realize that I could have opted to work on those kitchen cabinets by myself (and maybe would have gotten the job done quicker); but I would have missed the chance to have a small part in seeing this young boy grow in his confidence of what he could do with a power drill, and more importantly, what he could do for his family.

Through the years, I have been blessed to have people in my life who have handed me the “power drill”, so to speak, and invited me to stretch and to grow—to become something more.

These mentors, these leaders, were TEAM leaders—leaders who got just as much satisfaction out of seeing the success of someone else as they did for themselves. Perhaps more.

I aspire to be that kind of a leader. Don’t you? That aspiration has caused me to think a lot about the heart of a team leader and the activity that flows from it. Here are a few learnings that I have curated along the way:

Team leaders believe in you—and they often do so before you believe in yourself. There is nothing quite as powerful as knowing that someone you respect believes in you.

Team leaders are irreversibly enthusiastic about the team. It simply is how they approach life. Management icon, Peter Drucker, puts it this way: The leaders who work most effectively, it seems to me, never say “I”. And that’s not because they have trained themselves not to say “I”. They don’t think “I”. They think “we”, they think “team”.

Team leaders create space for members of the team to shape, to advise, to challenge, to innovate, to redirect, as well as to fail. They go out of their way to solicit the fullest participation of those on the team.

Team leaders are obsessed with dishing out credit for a job well done. They constantly affirm the contributions of those with whom they partner. In the end, they make you feel like owners, not hired hands.

Team leaders care about the members of the team. They engage with the team not as producers, but as partners. They realize that strong relationships are fundamental to mission accomplishment.

Team leaders care about the members of the team. They engage with the team not as producers, but as partners.

When you boil it all down, life and leadership is a journey—a journey full of “next steps”.

As a TEAM leader, what’s yours?

The Leader and Collaboration

IQ Is One Thing…But EQ Is Everything!