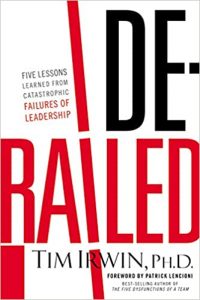 What causes a leader to fail and how do we avoid meeting the same fate? This is the primary question answered in Derailed: 5 Lessons Learned from Catastrophic Failures of Leadership. The story of the fallen CEO has become a cultural fixture: veering off course with the force of a train careening off its tracks, leaving fiery wreckage and devastating injury throughout the organization. These executives are often the smartest and most respected individuals in their industries, with glittering resumes and histories of successful leadership. Yet they astonish us by driving the train dramatically off course, blinded by unchecked power and arrogance.Dr. Tim Irwin believes that these leaders suffer from failures of character that are common to each of us—even the most capable individuals. Deficits in authenticity, humility, self-management, and courage become more dangerous as we take on more leadership, and can cause us to ignore glaring signals that might otherwise save us from catastrophic demise. Derailed chronicles the collapse of six high-profile CEOs and the factors that drove their downfalls, finding that derailment actually happens long before the crash and can be avoided. Tim Irwin explains the character qualities that are essential for successful leadership and tells us how to cultivate them so that we can avoid derailing our own careers.Tim Irwin, Ph.D., is an author, speaker, and leading authority on leadership development, organizational effectiveness, and executive selection. For more than twenty years, he has consulted with many of America’s most well-respected organizations and top Fortune 100 companies. He has also served in a senior management post for a US-based company with more than three hundred offices worldwide. Presently, he is managing partner of Irwin Inc.

What ultimately caused the derailment of the individuals profiled in upcoming chapters was a failure of character! The big lesson is that no matter how brilliant, charming, strategic, or commanding in presence a leader is, the consequences of a failed character are extraordinarily disabling and will bring down even the strongest among us. (12)

If and when we’re willing to put some light on our own less-admirable qualities, it becomes painfully apparent that we all have the latent potential to derail, and many of our darker characteristics fully expressed can get us off tract in a hurry. (14)

Though expressed in a variety of different behaviors, they are all tied to a lack of or failure of one of these four critical qualities:

The unmitigated expression of the dark side of these four qualities renders a person in leadership or at any level of an organization ineffective, regardless of their other capabilities. (17)

Leaders make mistakes. While they are held to a higher standard, they will have lapses in judgment. Certain mistakes, handled tactfully, willfully, and humbly are often forgivable to the point the position of leadership is salvageable. The same, mistakes avoided and handled irresponsibly—or worse, flippantly and arrogantly—often say a lot more about a leader than the mistakes ever did. (63)

It is said that adverse circumstances do not make or break you; they reveal you. (72)

Derailment occurs in a predictable progression—a process that those who derail seem to follow. Derailed leaders progress through five stages as they head toward their demise.

Our character serves as the wellspring from which our behavior emerges. (100)

Sound character works like a boat’s ballast, so that when we encounter turbulence, we don’t keel over and take on water. (101)

Character is not about intelligence. As David Gergen has pointed out, if intelligence and character were the same, Presidents Nixon and Clinton would have been two of the best. Neither controlled their passions. Gergen added, “Capacity counts, but once a candidate passes that test, character counts even more.” (101)

Leaders must set direction, gain alignment among diverse constituencies, risk change, build high-performance teams, achieve results, go the extra mile, and endure ungodly stress. To be enthusiastically followed, leaders must also be guided by an inner compass that fosters trust on the part of their followers. (102)

I don’t know anyone who plans their adversity—it is not something we control. Perhaps that’s why adversity is good for character. Its apparent randomness purifies our perspectives and reminds us of our humanity—that our control is actually quite limited. (105)

James Kouzes and Barry Posner’s research for their book Credibility determined that an executive’s credibility is the cornerstone of effectiveness. Our credibility results directly from our authenticity! (115)

Take off the mask and lay down the baseline of authenticity from which to build:

Self-management may be best defined as skill, insight, sensitivity, impulse control, optimism, and persistence applied in the particular environment in which we work and live. (123)

Dr. Daniel Goleman states that in business, “IQ and technical skills are important, but ’emotional intelligence’ is the sine qua non of leadership.” Emotional intelligence (EQ) generally comprises the capability to be self-aware, self managing, interpersonally effective, stress tolerant, and optimistic. (125)

Goleman asserts that EQ counts for 80-90 percent of the factors that distinguish average from outstanding leaders. His research indicates that the higher a leader rises in an organization, the less important technical skills become and the more important EQ becomes. (125)

A common axiom states that IQ (Intelligence Quotient) gets you hired, while EQ gets you promoted. (125)

Self-aware individuals pay attention to their emotions without being ruled by them. (126)

Speaking our true beliefs and convictions authentically often leads to credibility and trust. It also takes courage to speak “truth to power”—to tell the CEO or someone high up in the organization what you really believe—but personal directness must be tempered with good judgment. (128)

Arrogance is presumptuousness, overbearing pride, and an unwarranted, exalted sense of self-importance. (140)

Courage is not being unafraid. It’s about choosing to do the right thing under difficult circumstances. (149)

Courage emanates from our resolute beliefs and core convictions. (150)

Convictions give us the courage to venture a self-authored opinion and to have a thoughtful, well-founded set of ideas to offer even when those ideas go against a more widely held view or even the view of our manager. (151)

Speaking truth to power does not always achieve the result we want, but it does make a major statement about character. (153)

Five Critical Habits of the Heart:

1. THE HABIT OF OPENNESS
The first antidote to derailment is openness to feedback.
2. THE HABIT OF SELF-/OTHER-AWARENESS
3. THE HABIT OF LISTENING TO EARLY WARNING SYSTEMS
4. THE HABIT OF ACCOUNTABILITY
Paradoxically, vulnerability on the part of a leader raises trust and respect.
5. THE HABIT OF RESILIENCY (172-189)

The Truest Thing About You: Identity, Desire, and Why it All Matters

Called: The Crisis and Promise of Following Jesus Today