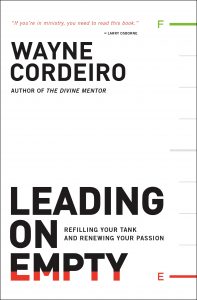 Title: Leading On Empty: Refilling Your Tank and Renewing Your Passion

A message of revitalization and encouragement for leaders before they leave the ministry. Wayne Cordeiro, author of Doing Church as a Team, found himself paralyzed by burnout. He had been in ministry for 30 years, and 10 years after founding what is now the largest church in Hawaii, he found himself depleted. Wayne took a season out of his growing ministry to recharge and refocus on the truly important. He got back in touch with his life, got back in proper balance, and re-energized his spirit through Christ and came back to serve with new passion and joy. Wayne first gave this message at a Willow Creek Leadership Summit, where it was the highest-rated presentation by those in attendance.

In the same way, when you go through dark seasons, you will be restricted by, or released to, what has already been established within your soul. – Highlight Loc. 61

It is in the quiet crucible of your personal, private sufferings that your noblest dreams are born and God’s greatest gifts are given in compensation for what you have been through. – Highlight Loc. 107-9

It is a gift to be able to launch an inspiring vision. But unless you manage it along the way, it can turn on you, and soon the voracious appetite of the vision consumes you. – Highlight Loc. 132-33

Should you continue to run on adrenaline, it will destroy your system. You will burn out sooner on the inside than you’re able to see on the outside. The fuel of adrenaline that keeps your engines running in the beginning will turn on you and destroy you in the end. – Highlight Loc. 179-80

No one is immune from the slow grip of depression when they are wrestling through a season of burnout. It is an uninvited guest that you endure, then with God’s help, resolve. – Highlight Loc. 344-45

Depression haunts you with feelings of worthlessness and clouds your hope. It attacks your faith and it smothers your future. Bouts of crying, a general decrease of pleasure in life, and a lessened energy follow you like shadows increasing into dark days and long nights. – Highlight Loc. 346-48

Long-term stress depletes the normal fuel produced biochemically by hormones and secreted into the brain and nervous system. These endorphins and other peptides produce an analgesic effect. Once these serotonins are exhausted, adrenaline has to be produced to take their place. Soon an addiction to adrenaline puts a demand on your body for greater amounts. Adrenaline, also known as epinephrine, is secreted in increasing rates, and your body becomes dependent on this powerful chemical to meet deadlines, get reports ready, and rise to the expectations of others- -or your own.

Adrenaline addiction is an emotional suicide that will slowly progress and may be difficult to detect. If not recognized, stress will precede burnout, and burnout is often accompanied by a super-sized helping of depression. – Highlight Loc. 418-23

Problems don’t destroy you. Unresolved problems do. These are the nagging issues that create a breeding ground of fear. We feel compelled to live in the past and feel as if our hope for tomorrow is slipping away from us. Unresolved problems spawn chronic illness, work stress, relationship problems, and family breakdowns; any of these unwelcome life symptoms can trigger depression. – Highlight Loc. 441-44

Depressed people believe that life is not getting any better, and they see little hope for improvement. Their thoughts are tainted with pessimistic views of themselves, their futures look bleak, and their circumstances appear inescapable. They feel cursed by persistent sadness, apathy, and melancholy feelings of heaviness. – Highlight Loc. 486-88

When I returned from my little self-imposed exile, I knew I would somehow have to rearrange a host of drivers in my thinking and activities, learning what filled and what drained my tank. I had to learn how to recognize the symptoms and be more preventive than medicinal. It would require either a new line of work or a new way of thinking. I would opt for a new way of thinking. The days I spent at the monastery taught me the difference between solitude and isolation. They may contain similar characteristics, but in reality they are worlds apart. Solitude is a chosen separation for refining your soul. Isolation is what you crave when you neglect the first. For several days I pondered and recorded what God was revealing to me. Were there trigger points I wasn’t aware of? Were there warning signs I was clearly aware of but ignored? I had to evaluate what brought me to the cliff’s edge … and what took me over. Sometimes we get so busy rowing the boat, we don’t take the time to stop and see where we’re going … or what we are becoming. It’s a little difficult to describe those days. It was like looking in the mirror and being introduced to myself for the first time in a few years- -and to what I had become.

Alone in the monastery, I began a retrospective journey. God surfaced personal fears and false assumptions that I had retained as truth for many years. These weren’t necessarily sins in my life, but their overall effects seemed every bit as destructive.

In the ministry of shepherding people, we learn to depend on such tools as insight, intuition, judgment, and discernment. Developing and honing these skills makes for a great leader, but if unguarded, it opens the door to under-processed conclusions and inaccurate assumptions. The ability to precisely define reality is the starting point for any hope for equilibrium. In the first two days at the monastery, I searched for triggers that could have begun the downward journey that caused the shrinkage of my soul. I had to find those culprits, those hidden snares that had tripped me up again and again. The evenings went long, and the days crawled by. The answers I desperately needed eluded me. I think God did this so that I would journey farther down the road with Him, perhaps discovering so much more than I had set out to look for in the first place.

In 2006, the Federal Aviation Administration grounded all DC-10s because on one flight the engine fell off, resulting in the death of 213 passengers. This unthinkable flaw didn’t take place overnight; it was the result of successive times of ignored maintenance. When my wheels fell off, I knew that it was due to a longstanding practice of disregarding certain feelings of inadequacy, discouragement, and anger. – Highlight Loc. 562-82

So many of my worries have come from my inability (or unwillingness) to discern between a concern and a responsibility. I had mixed them up, and as a result, the world was resting on my shoulders. – Highlight Loc. 605-7

I had to come to grips with what only I could accomplish. These things could not be delegated, ignored, or sloughed off onto someone else. These would be responsibilities that, in the end, God would hold me accountable for. – Highlight Loc. 618-19

But 5 percent of what I do, only I can do! This is the most important 5 percent for me. I can’t delegate these initiatives to anyone else. I can’t hire someone else to take my place in any of these activities because they require that I be there. This 5 percent will determine the validity of the other 95 percent. This is what I had to discover and make as the epicenter of my life. – Highlight Loc. 632-35

Here are the hard facts: The busier I became, the less time I had for activities that replenished me. – Highlight Loc. 743

The adversary lurks in the shadows of vulnerable moments in our lives. Like an uncomplaining sniper squatting in a darkened second-story room, he squints patiently into his high-powered scope, waiting for an opportune time to squeeze off a shot at his unsuspecting target. – Highlight Loc. 781-82

Solitude is a healthy and prescriptive discipline; isolation is a symptom of emotional depletion. – Highlight Loc. 788

Faith is living in advance what we will only understand in reverse. – Highlight Loc. 852-53

There is one thing you must learn about burnout: From now on, depression will never be far away. You may not be feeling your way along a dark forest pathway, but the woods will never be completely out of view. String a few failures together, or have a problem at home, and you may very well feel the shadows begin to blot out your view of the sun once again. You may find yourself withdrawing, searching for repose and solitude. – Highlight Loc. 944-47

Rest has to be a primary responsibility. It brings a rhythm back to life and a cadence that makes life sustainable. – Highlight Loc. 1062-63

If you miss building that home base, you will have nowhere to go when your ministry days are over. You’ll arrive back on your doorstep with your boxes of books and notes, and you’ll have nothing to walk into- -except shards of yesterday’s mistake of putting your job, ministry, or career ahead of everything else. Restore the preeminence of the family early on. Too many have sacrificed marital harmony and family on the altar of success. It’s not worth it. – Highlight Loc. 1204-7

It is hope- -a picture of your preferred future- -that will give you the sustenance needed to press through to your highest potential regardless of what your circumstances or surroundings look like. – Highlight Loc. 1287-88

Let me suggest to you a definition of prayer: Prayer is thinking deeply about something in the presence of God. It may include intercession, but it is far more than that. It is in discussing these things with the Holy Spirit that we receive understanding and insight. – Highlight Loc. 1725-26

QUESTIONS TO ASK IN A SEASON OF SELF-ASSESSMENT: 1. What was my original calling from God? 2. What activities that I am involved in do I love the most? 3. What activities and people have been draining my tank? 4. If I retired today with several million dollars and no debts, what would I do? 5. What triggered my depletion? 6. What am I doing now that I cannot do anymore? 7. What are those things that I enjoy doing but cannot do to the level I am involved now? 8. Who do I need to share these findings with so that the rebuilding can begin? – Highlight Loc. 1774

Your greatest source of motivation is finding untapped potential yet within you. You see, your future is not what lies ahead of you. It is what lies within you. – Highlight Loc. 1795-96

Note: should you wish to find any quote in its original context, the Kindle “highlight location” is provided after each entry.