The Contrarian’s Guide to Leadership 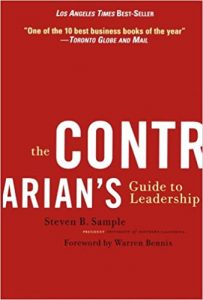 Title: The Contrarian’s Guide to Leadership

Are you the type of leader who finds it difficult to make quick-­‐assessments of people or ideas? Do you fail to read all the things that come across your desk? Do you frequently find yourself wondering whether conventional wisdom is just a bit too simplistic for the realties of our day?

Good, says Steven Sample. You’re already well on your way to becoming a contrarian leader-­‐ -­‐one who sees situations from his own unique point of view and who finds genuinely new solutions to the challenges facing his organization.

Widely regarded as one of this generation’s most effective and innovative university presidents, Sample presents in this book profound leadership lessons that combine a masterful survey of history with rich insights from personal experience.

As management guru Warren Bennis notes in the forward, “There are few originals left in American society today-­‐ -­‐men and women who speak with a unique voice and who can offer an unconventional perspective and bracing authenticity. Steve Sample is an undisputed original. Simply put, his is a voice that should be heard by all those who would aspire to lead thoughtfully and effectively in our own time.”

But one of the most important and contrarian points we can make about leadership is that it is highly situational and contingent; the leader who succeeds in one context at one point in time won’t necessarily succeed in a different context at the same time, or in the same context at a different time. (1)

A truly effective leader, however, needs to be able to see the shades of gray inherent in a situation in order to make wise decisions as to how to proceed. The essence of thinking gray is this: don’t form an opinion about an important matter until you’ve heard all the relevant facts and arguments, or until circumstances force you to form an opinion without recourse to all the facts (which happens occasionally, but much less frequently than one might imagine). (7-­‐8)

The difference between thinking out of the box and thinking free can be understood when we imagine ourselves coming out of a heated swimming pool on a cool, brisk day. When we merely think out of the box, we stay in the cold just long enough to feel slightly uncomfortable, and then hastily retreat either back into the warm pool or indoors. But when we are truly thinking free, we stay out in the cold until we shiver and our teeth chatter. It’s the ability to tolerate the cold long after it becomes unpleasant-­‐ -­‐to forcibly sustain our thinking free for more than a fleeting moment-­‐ -­‐that leads to the greatest innovations. (12)

But contrarian leaders know it is better to listen first and talk later. And when they listen, they do so artfully. (21)

In these tempestuous times it often appears that everything is changing, and changing at an increasingly rapid rate. In such an environment a leader can gain a tremendous competitive advantage by being able to discern the few things that are not changing at all, or changing only slowly and slightly. And nothing can help him do that better than developing a close relationship with a few of the supertexts. (57-­‐58)

But here’s the key: the leader who delegates is forced to build coherence by putting together a team of lieutenants who have shared values and common goals. (74)

One of the best ways to maintain these limits on predictability and manipulation is for the leader to occasionally make a decision which he would normally delegate to a lieutenant. Doing so throws subordinates off balance just a bit, thereby helping them remember that their authority is delegated to them by the leader and that consequently they are stewards of something that ultimately belongs to the leader and not to them. (76)

General George McClellan is a wonderful example of a cowardly procrastinator. Named by Lincoln to command the Army of the Potomac in 1861, McClellan wasted numerous opportunities to seriously engage and perhaps even defeat the Confederate forces. As the historian Garry Wills observed in Certain Trumpets, “For McClellan, the doctrine of predominant numbers was a principle of paralysis. He felt he never had enough troops, well enough trained or equipped.” After McClelland repeated squandered the North’s military advantage over the South, Lincoln sacked him. McClellan may have simply been the victim of the Peter Principle-­‐ -­‐a brilliant and talented man promoted just one notch over his head. But certainly his ability to make bold decisions when the time came to make them was almost nil. (83)

On the other hand, Machiavelli’s advice that, if forced to make an exclusive choice between the two, a principle should prefer to be feared rather than loved by his subjects, and above all not be hated by them, may be very good advice for a modern business leader. (94)

It’s relatively easy for people to agree on the characteristics of an effective leader: he has a clear and compelling vision; inspires trust, commitment and self-­‐sacrifice among his followers; chooses capable lieutenants; keeps his eye on the goal; and pushes himself and others relentlessly. (107)

Now here’s one of the most contrarians bits of advice you can imagine: Once you know which hill you’re really willing to die on, keep it to yourself. (112)

It’s fine to reveal, or even trumpet, your core values, but be careful about telling the world the exact location of the hill you’re willing to die on. (112)

But Harry’s Rule allows us to understand why it is so important to recruit the very best leaders to top-­‐level positions in any organization, and why as a general rule the competence of the staff declines so rapidly as we descend the ranks of an organization whose top leader is only mediocre. (124)

But time and again I have been advised by successful leaders that, between two roughly equal candidates, one should always choose the younger. (126)

By contrast, I make certain that the line officers who are my direct reports have unfettered access to me-­‐ -­‐ twenty-­‐four hours a day, seven days a week, no questions asked…In other words, the decision as to whether or not my assistant should interrupt me is vested in the line officer, not in the assistant. (130)

To a large degree, leaders live and die through the actions of their chief lieutenants. Choosing these people, motivating them, supporting them, helping them grow and achieve, inspiring them, evaluating them and firing them are among the most important things a leader does. (139)

The contrarian leader knows that the human brain is prewired at the deepest levels in favor of the spoken word; if you wish to really inspire your followers and touch them at their emotional core, you must speak to them. (149)

Few people will ever play a major leadership role in a real war. But the contrarian leader understands that the metaphor of war is one of the most powerful tools he has for attracting and motivating followers. (153)

The challenge is for the person at the top to be such an excellent supervisor-­‐ -­‐fair, supportive, demanding, a good listener, motivating, and inspiring-­‐ -­‐that these values will be internalized and replicated via people chains at every level in the organization. (156)

In this regard I have come up with Sample’s 70/30 Formula for Leadership-­‐ -­‐to wit, under ideal conditions up to 30 percent of a leader’s time can be spent on really substantive matters, and no more than 70 percent of his time should be spent reacting to or presiding over trivial, routine or ephemeral matters. (161)

Whatever it is you’re doing can always be done better, and hence there is no upper bound on the amount of resources that can be consumed in the pursuit of perfection. The contrarian leader’s maxim in this arena is this: Anything worth doing at all is worth doing just well enough. The tricky job for the leader is deciding what “just well enough” means in each particular situation. (168)

How To Lead in a World of Distraction: Four Simple Habits for Turning Down the Noise

Get Your Life Back: Everyday Practices For a World Gone Mad