The Five Dysfunctions of a Team 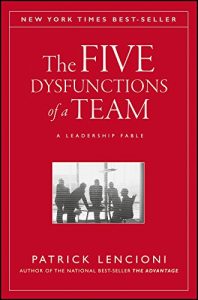 Title: The Five Dysfunctions of a Team

The Five Dysfunctions of a Team outlines the root causes of politics and dysfunction on the teams where you work, and the keys to overcoming them. Counter to conventional wisdom, the causes of dysfunction are both identifiable and curable. However, they don’t die easily. Making a team functional and cohesive requires levels of courage and discipline that many groups cannot seem to muster.

Not finance. Not strategy. Not technology. It is teamwork that remains the ultimate advantage, both because it is so powerful and so rare. (vi)

A friend of mine, the founder of a company that grew to a billion dollars in annual revenue, best expressed the power of teamwork when he once told me, “If you could get all the people in an organization rowing in the same direction, you could dominate any industry, in any market, against any competition, at any time.” (vii)

But that is not to say that teamwork is doomed. Far from it. In fact, building a strong team is both possible and remarkably simple. But it is painfully difficult. (viii)

The Five Dysfunctions of a Team

1.  The first dysfunction is an absence of trust among team members. Essentially, this stems from their unwillingness to be vulnerable within the group. Team members who are not genuinely open with one another about their mistakes and weaknesses make it impossible to build a foundation for trust.

2.  This failure to build trust is damaging because it sets the tone for the second dysfunction: fear of conflict. Teams that lack trust are incapable of engaging in unfiltered and passionate debate of ideas. Instead, they resort to veiled discussions and guarded comments.

3.  A lack of healthy conflict is a problem because it ensures the third dysfunction of a team: lack of commitment. Without having aired their opinions in the course of passionate and open debate, team members rarely, if ever, buy in and commit to decisions, though they may feign agreement during meetings.

4.  Because of this lack of real commitment and buy-in, team members develop an avoidance of accountability, the fourth dysfunction. Without committing to a clear plan of action, even the most focused and driven people often hesitate to call their peers on actions and behaviors that seem counterproductive to the good of the team.

5.  Failure to hold one another accountable creates an environment where the fifth dysfunction can thrive. Inattention to results occurs when team members put their individual needs (such as ego, career development, or recognition) or even the needs of their divisions above the collective goals of the team. (188-189)

Another way to understand this model is to take the opposite approach—a positive one—and imagine how members of truly cohesive teams behave:

1. DYSFUNCTION 1: ABSENCE OF TRUST
Trust lies at the heart of a functioning, cohesive team. Without if, teamwork is all but impossible.

In the context of building a team, trust is the confidence among team members that their peers’ intentions are good, and that there is no reason to be protective or careful around the group. In essence, teammates must get comfortable being vulnerable with one another. (195)

It requires team members to make themselves vulnerable to one another, and be confident that their respective vulnerabilities will not be used against them. The vulnerabilities I’m referring to include weakness, skill deficiencies, interpersonal shortcomings, mistakes, and requests for help.

Achieving vulnerability-based trust is difficult because in the course of career advancement and education, most successful people learn to be competitive with their peers, and protective of their reputations. (196)

The most important action that a leader must take to encourage the building of trust on a team is to demonstrate vulnerability first. (201)

Teams that engage in conflict…

In the context of a team, commitment is a function of two things: clarity and buy-in. Great teams make clear and timely decisions and move forward with complete buy-in from every member of the team, even those who voted against the decision. (207)

A team that commits…

In the context of teamwork, however, it refers specifically to the willingness of team members to call their peers on performance or behaviors that might hurt the team. (212)

As politically incorrect as it sounds, the most effective and efficient means of maintaining high standards of performance on a team is peer pressure. (213)

A team that holds one another accountable…

A good way to make it easier for team members to hold one another accountable is to clarify publicly exactly what the team needs to achieve, who needs to deliver what, and how everyone must behave in order to succeed. (214)

One of the most difficult challenges for a leader who wants to instill accountability on a team is to encourage and allow the team to serve as the first and primary accountability mechanism. (215)

The ultimate dysfunction of a team is the tendency of members to care about something other than the collective goals of the group. (216)

A team that focuses on collective results…

Success is not a matter of mastering subtle, sophisticated theory, but rather of embracing common sense with uncommon levels of discipline and persistence. (220)