The Five Temptations of a CEO 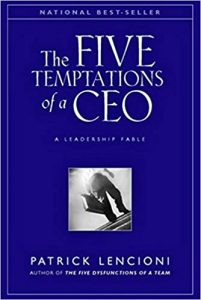 Title: The Five Temptations of a CEO

A commemorative edition of the landmark book from Patrick Lencioni when it was published ten years ago, The Five Temptations of a CEO was like no other business book that came before. Highly sought-after management consultant Patrick Lencioni deftly told the tale of a young CEO who, facing his first annual board review, knows he is failing, but doesn’t know why. Refreshingly original and utterly compelling, this razor-sharp novelette plus self-assessment (written to be read in one sitting) serves as a timeless and potent reminder that success as a leader can come down to practicing a few simple behaviors that are painfully difficult for each of us to master. Any executive can learn how to recognize the mistakes that leaders can make and how to avoid them. The lessons of The Five Temptations of a CEO, are as relevant today as ever, and this special anniversary edition celebrates ten years of inspiration and enlightenment with a brand new introduction and reflections from Lencioni on the new challenges in business and leadership that have occurred in the past ten years.

Being the chief executive of an organization is one of the most difficult challenges a person can face in a career. But it is not a complicated one. (vii)

The tragedy here is that most executives are intuitive enough to understand all this—but many of them struggle to do anything about it. Instead, they unconsciously distract themselves and others from the personal leadership issues by getting overly involved in the details of their businesses, often to the point of creating complexity where it shouldn’t exist. (ix)

But I can say that being a CEO should be conceptually simple. (21)

When I work with executive teams, I explain that if the CEO’s behavior is ninety-five percent healthy while the rest of the organization is just fifty percent sound, I’ll choose to focus on that crucial and leveraged five percent that makes up the remainder of the CEO’s behavior…Although every leader agrees in theory with this line of thinking, few are willing to put it into practice and endure the painful self-examination required to “fix” that final five percent. And yet, a willingness to do this is exactly what separates leaders who succeed from those who fail. (106)

The most important principle that an executive must embrace is a desire to produce results. (112)

Simple advice for CEOs: make results the most important measure of personal success, or step down from the job. The future of the company you lead is too important for customers, employees, and stockholders to hold it hostage to your ego. (113)

Even CEOs who resist the temptation to over focus on protecting their status sometimes fail. Why? Because they do not hold their direct reports accountable for delivering on the commitments that drive results. This happens because they succumb to a different temptation: the desire to be popular. (113)

Simple advice for CEOs: work for the long-term respect of your direct reports, not for their affection. Don’t view them as a support group, but as key employees who must deliver on their commitments if the company is to produce predictable results. And remember, your people aren’t going to like you anyway if they ultimately fail. (114)

Simple advice for CEOs: make clarity more important than accuracy. Remember that your people will learn more if you take decisive action than if you always wait for more information. And if the decisions you make in the spirit of creating clarity turn out to be wrong when more information becomes available, change plans and explain why. It is your job to risk being wrong. The only real cost to you of being wrong is loss of pride. The cost to your company of not taking the risk of being wrong is paralysis. (116)

Even CEOs who resist the temptation to protect their status, to be popular with their direct reports, and to make correct decisions sometimes fail because they don’t feel comfortable with the decisions they make. That’s because they haven’t benefited from the best sources of information that are always available to them: their direct reports. Why not? Because they give in to the next temptation: the desire for harmony.

Even CEOs who resist the temptation to protect their status, to be popular with their reports, to make correct decisions, and to create harmony sometimes fail. Why? Because even though they are willing to cultivate productive conflict, their people may not be willing to do so. Why not? Because the CEO gives in to the final temptation: the desire for invulnerability. (117)

Simple advice for CEOs: actively encourage your people to challenge your ideas. Trust them with your reputation and your ego. As a CEO, this is the greatest level of trust that you can give. They will return it with respect and honesty, and with a desire to be vulnerable among their peers.

CEOs who focus on results more than status, accountability more than popularity, clarity more than certainty, productive conflict more than harmony, and trust more than invulnerability can still fail, but only if they are thwarted by competitive and market pressures that are largely out of their control.

Productive executive staff meetings should be exhausting inasmuch as they are passionate, critical discussions. Pleasant meetings—or even worse, boring ones—are indications that there is not a proper level of overt, constructive, ideological conflict taking place. But don’t be deceived. Every meeting has conflict. Some executives just sweep that conflict under the table and let employees deeper in the organization sort it out. This doesn’t happen by accident. (129)

The Four Obsessions of an Extraordinary Executive

The Call To Lead: Following Jesus and Living Out Your Mission

Live No Lies: Recognize and Resist the Three Enemies That Sabotage Your Peace