The Power of Habit 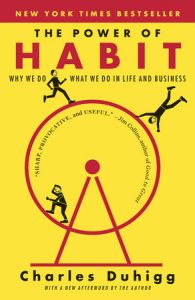 Title: The Power of Habit: Why We Do What We Do in Life and Business

In The Power of Habit, Pulitzer Prize-winning business reporter Charles Duhigg takes us to the thrilling edge of scientific discoveries that explain why habits exist and how they can be changed. Distilling vast amounts of information into engrossing narratives that take us from the boardrooms of Procter & Gamble to sidelines of the NFL to the front lines of the civil rights movement, Duhigg presents a whole new understanding of human nature and its potential. At its core, The Power of Habit contains an exhilarating argument: The key to exercising regularly, losing weight, being more productive, and achieving success is understanding how habits work. As Duhigg shows, by harnessing this new science, we can transform our businesses, our communities, and our lives.

One paper published by a Duke University researcher in 2006 found that more than 40 percent of the actions people performed each day weren’t actual decisions, but habits. Location 121

Habits can be changed, if we understand how they work. Location 138

It focuses on habits as they are technically defined: the choices that all of us deliberately make at some point, and then stop thinking about but continue doing, often every day. Location 141

This explains why habits are so powerful: They create neurological cravings. Most of the time, these cravings emerge so gradually that we’re not really aware they exist, so we’re often blind to their influence. But as we associate cues with certain rewards, a subconscious craving emerges in our brains that starts the habit loop spinning. Location 841

This is how new habits are created: by putting together a cue, a routine, and a reward, and then cultivating a craving that drives the loop. Take, for instance, smoking. When a smoker sees a cue—say, a pack of Marlboros—her brain starts anticipating a hit of nicotine. Just the sight of cigarettes is enough for the brain to crave a nicotine rush. If it doesn’t arrive, the craving grows until the smoker reaches, unthinkingly, for a Marlboro. Location 861

Rather, to change a habit, you must keep the old cue, and deliver the old reward, but insert a new routine. That’s the rule: If you use the same cue, and provide the same reward, you can shift the routine and change the habit. Almost any behavior can be transformed if the cue and reward stay the same. Location 1049

Notice how closely this study hews to the Golden Rule of habit change: Even when alcoholics’ brains were changed through surgery, it wasn’t enough. The old cues and cravings for rewards were still there, waiting to pounce. The alcoholics only permanently changed once they learned new routines that drew on the old triggers and provided a familiar relief. “Some brains are so addicted to alcohol that only surgery can stop it,” said Mueller. “But those people also need new ways for dealing with life.” Location 1212

But we do know that for habits to permanently change, people must believe that change is feasible. The same process that makes AA so effective—the power of a group to teach individuals how to believe—happens whenever people come together to help one another change. Belief is easier when it occurs within a community. Location 1451

How do habits change? There is, unfortunately, no specific set of steps guaranteed to work for every person. We know that a habit cannot be eradicated—it must, instead, be replaced. And we know that habits are most malleable when the Golden Rule of habit change is applied: If we keep the same cue and the same reward, a new routine can be inserted. But that’s not enough. For a habit to stay changed, people must believe change is possible. And most often, that belief only emerges with the help of a group. If you want to quit smoking, figure out a different routine that will satisfy the cravings filled by cigarettes. Then, find a support group, a collection of other former smokers, or a community that will help you believe you can stay away from nicotine, and use that group when you feel you might stumble. Location 1493

The evidence is clear: If you want to change a habit, you must find an alternative routine, and your odds of success go up dramatically when you commit to changing as part of a group. Belief is essential, and it grows out of a communal experience, even if that community is only as large as two people. Location 1503

Some habits, in other words, matter more than others in remaking businesses and lives. These are “keystone habits,” and they can influence how people work, eat, play, live, spend, and communicate. Keystone habits start a process that, over time, transforms everything. Location 1591

Keystone habits say that success doesn’t depend on getting every single thing right, but instead relies on identifying a few key priorities and fashioning them into powerful levers. Location 159

It’s not completely clear why. But for many people, exercise is a keystone habit that triggers widespread change. “Exercise spills over,” said James Prochaska, a University of Rhode Island researcher. “There’s something about it that makes other good habits easier.” Location 1716

If you focus on changing or cultivating keystone habits, you can cause widespread shifts. However, identifying keystone habits is tricky. To find them, you have to know where to look. Detecting keystone habits means searching out certain characteristics. Keystone habits offer what is known within academic literature as “small wins.” They help other habits to flourish by creating new structures, and they establish cultures where change becomes contagious. Location 1723

And the best way to strengthen willpower and give students a leg up, studies indicate, is to make it into a habit. Location 2057

Willpower isn’t just a skill. It’s a muscle, like the muscles in your arms or legs, and it gets tired as it works harder, so there’s less power left over for other things. Location 2138

As people strengthened their willpower muscles in one part of their lives—in the gym, or a money management program—that strength spilled over into what they ate or how hard they worked. Once willpower became stronger, it touched everything. Location 2164

When people are asked to do something that takes self-control, if they think they are doing it for personal reasons—if they feel like it’s a choice or something they enjoy because it helps someone else—it’s much less taxing. If they feel like they have no autonomy, if they’re just following orders, their willpower muscles get tired much faster. In both cases, people ignored the cookies. But when the students were treated like cogs, rather than people, it took a lot more willpower. Location 2349

During turmoil, organizational habits become malleable enough to both assign responsibility and create a more equitable balance of power. Crises are so valuable, in fact, that sometimes it’s worth stirring up a sense of looming catastrophe rather than letting it die down. Location 2720

In fact, crises are such valuable opportunities that a wise leader often prolongs a sense of emergency on purpose. Location 2772

A movement starts because of the social habits of friendship and the strong ties between close acquaintances. It grows because of the habits of a community, and the weak ties that hold neighborhoods and clans together. And it endures because a movement’s leaders give participants new habits that create a fresh sense of identity and a feeling of ownership. Location 3340

When sociologists have examined how opinions move through communities, how gossip spreads or political movements start, they’ve discovered a common pattern: Our weak-tie acquaintances are often as influential—if not more—than our close-tie friends. Location 3452

Every Saddleback member is asked to sign a “maturity covenant card” promising to adhere to three habits: daily quiet time for reflection and prayer, tithing 10 percent of their income, and membership in a small group. Giving everyone new habits has become a focus of the church. Location 368

This is the third aspect of how social habits drive movements: For an idea to grow beyond a community, it must become self-propelling. And the surest way to achieve that is to give people new habits that help them figure out where to go on their own. Location 3690

Note: should you wish to find any quote in its original context, the Kindle “location” is provided after each entry.

At Your Best: How to Get Time, Energy, and Priorities Working in Your Favor

From the Inside Out: Leading Where it Matters Most: The How-to Guide to Leading Nonprofits for Impact