Leading Against the Current 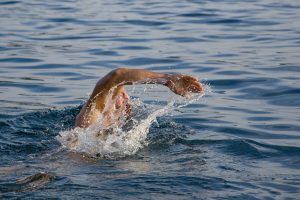 It was my day off. And it couldn’t have started better.

I headed out from the home a tad earlier than normal because beating the morning traffic in LA is both art form and big-league accomplishment. After clocking a few miles on the 110 freeway, I arrived at Redondo Beach for a time of solitude just as the skies gently ushered in a new day.

As I soaked in the salt-filled air, I began to inventory my surroundings. Seagulls darting playfully as they scored their morning bread. Larger-than-normal waves rolling to the shoreline, releasing a crashing clap. Sweat-browed, cardio-minded runners pounding the soft sand. And wet-suited surfers bobbing on their boards scoping out their next ride.

While immersing myself in the setting, something caught my eye. About 100 yards offshore, I spotted someone swimming. Seriously swimming. Steadily moving across the horizon—albeit slowly. Stroke. Stroke. Stroke. This guy was working hard. And unlike the surfers who could ride the momentum of the wave, he was swimming cross-current. Nothing easy about it. Impressive, to say the least.

The point is this: Tucked away at the top of the leader’s job description is the responsibility to lead “cross-current”—turning down the temptation to go with the flow, armed with a core conviction that God’s calling is to lead in a different direction.

At the top of the leader’s job description is the responsibility to lead “cross-current”…to lead in a different direction.

And mark it down, inarguably “God” and “different direction” fit comfortably into the same sentence.

That is to say, if you desire to step into the footprints of the Almighty, you’ve already had to reconcile yourself with His indisputable track record of modes of operation that are at times a bit different. Or shall we say, unorthodox? Or how about, unconventional?

God has an indisputable track record of modes of operation that are at times a bit different.

Just ask Moses about his assignment to high-tail it out of Egypt by splitting a body of water in two. (Do what?!).

Or interview Joshua about conquering a city by sponsoring a walkathon, handing out horns, and telling everyone to yell at the top of their lungs.

Or query Gideon about prepping for battle by DOWN-sizing his infantry—considerably. (Won’t read that one in The Art of War.)

And just to be clear. And fair. No mystery here. No punches pulled. God Himself calls it out: “For My thoughts are not your thoughts, neither are your ways My ways.” No need to read between the lines here. No need for video replay.

When your life is in the middle of God’s activity, He will start rearranging a lot of your thinking. God’s ways and thoughts are so different from yours and mine they will often sound wrong, crazy, or impossible. Often, you will realize that the task is far beyond your power or resources to accomplish. When you recognize that the task is humanly impossible, you need to be ready to believe God and trust Him completely.

You see, as leaders, it is at this very point that God has us right where He wants us. No alternate route. No plan B. The only available option is to choose the open door of invitation to follow Him.

Trusting that He not only knows the way, but He has made the way.

Trust God that He not only knows the way, but He has made the way.

What To Do When You’re Outmatched

What Every Leader Needs to Know About….Sleep