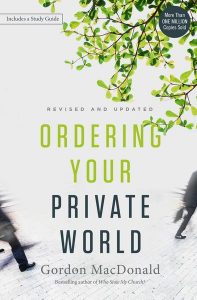 Many years ago, I read Ordering Your Private World by Gordon MacDonald. For me, it was the first time that I read anything of depth that addressed the interior life of a leader. His insights not only created a vocabulary for me regarding the ordered life, but a passion to pursue it—a passion that I have sought to build on some 30 years later. Believing that God works deeply in the life of a leader before He works significantly through that life, I have returned to this book on many occasions to reset my focus and realign my priorities. While this classic book has been updated in recent years, these BookNotes capture several verbatim quotes from the original publication. I highly recommend it to you.

We have schedule planners, computerized calendars, and self-stick notes to help us organize our business and social lives everyday. But what about organizing the other side of our lives―the spiritual side?

One of the great battlegrounds of the new century is within the private world of the individual. The values of our Western culture incline us to believe that the busy, publicly active person in ministry is also the most spiritual.

Tempted to give imbalanced attention to the public world at the expense of the private, we become involved in more programs, more meetings. Our massive responsibilities at home, work, and church have resulted in a lot of good people on the verge of collapse.

In this timely update of his classic Ordering Your Private World, Gordon MacDonald equips a new generation to live life from the inside out, cultivating the inner victory necessary for public effectiveness..

If my private world is in order, it will be because I am convinced that the inner world of the spiritual must govern the outer world of activity. (12)

The result is that our private world is often cheated, neglected because it does not shout quite so loudly. It can be effectively ignored for large periods of time before it gives way to a sinkhole-like cave in. (15)

I believe that one of the great battlegrounds of our age is the private world of the individual. There is a contest that must be fought particularly by those who call themselves practicing Christians. Among them are those who work hard, shouldering massive responsibilities at home, at work, and at church. They are good people, but they are very, very tired! And thus they too often live on the verge of a sinkhole-like collapse. (16)

If my private world I in order, it will be because I make a daily choice to monitor its state of orderliness. (20)

If my private world is in order, it will be because I recognize my proneness to operate according to schemes and patterns not made of God but fashioned by a disordered past. (28)

If my private world is in order, it will be because, having faced up to what drives me, I listen quietly for the call of Christ. (44)

If my private world is in order, it will be because I see myself as Christ’s steward and not as master of my purpose, my role, and my identity. (54)

It is this quality of certitude for which we seek when we compare driven persons and called persons. Driven people are confident they have that quality as they forge ahead. But often, at the moment when it is least expected, hostile events conspire, and there can be collapse. Called people have strength from within, perseverance and power that is impervious to the blows from without. (56)

John the Baptizer is a powerful example of a called man. He had the audacity to tell fellow Jews that they ought to quit justifying themselves on the bases of their sense of superior racial identity and face up to their need for spiritual and moral repentance. (56)

John, the called man, is a remarkable contrast to Saul, the driven man. Saul, the driven man, you will remember, reacted violently, lashing out against his perceived enemies when he became convinced that the preservation of his power and the survival of his position relied solely upon himself. (57)

If my private world is in order, it will be because I have made a daily determination to see time as God’s gift and worthy of careful investment. (68)

Disorganized Christians rarely enjoy intimacy with God. They certainly have intentions of pursuing that camaraderie, but it never quite gets established. No one has to tell them that time must be set aside for the purpose of Bible study and reflection, for intercession, for worship. They know all of that. They simply are not doing it. They excuse themselves, saying there is no time, but within their private worlds they know it is more a matter of organization and personal will than anything else. (72)

If my private world is in order, it is because I have begun to seal the “time leaks” and allocate my productive hours in the light of my capabilities, my limits, and my priorities. (80)

The Law of Unseized Time:

How time is recaptured:

If my private world is in order, it will be because I have determined that every day will be for me a day of growth in knowledge and wisdom. (96)

Like others, I am convinced that Christians ought to be the strongest, broadest, most creative thinkers in the world. (102)

If my private world is in order, it will be because I seek to use all I learn in service to others, as Christ did. (108)

If my private world is in order, it will be because I regularly choose to enlarge the spiritual center of my life. (124)

If we are ever to develop a spiritual life that gives contentment, it will be because we approach spiritual living as a discipline, much as the athlete trains his body for competition. (127)

For me the appropriate metaphor for the inner spiritual center is a garden, a place of potential peace and tranquility. This garden is a place where the Spirit of God comes to make self-disclosure, to share wisdom, to give affirmation or rebuke, to provide encouragement, and to give direction and guidance. When this garden is in proper order, it is a quiet place, and there is an absence of busyness, of defiling noise, of confusion. The inner garden is a delicate place, and if not properly maintained it will be quickly overrun by intrusive undergrowth. God does not often walk in disordered gardens. And that is why inner gardens that are ignored are said to be empty. (128)

PRIVILEGES WE CAN LOSE

If my private world is in order, it will be because I am unafraid to be alone and quiet before Christ. (134)

If my private world is in order, it will be because I absorb the words of Christ into my attitudes and actions. (148)

If my private world is in order, it will be because I have begun to pursue the discipline of seeing events and people through the eyes of Christ so that my prayers reflect my desire to be in alignment with His purposes and promises for them. (154)

A well-known Christian personality of our century, Eric Liddell, the Olympic champion runner who was the hero of the movie Chariots of Fire, had a remarkably different experience in a prison in North China during World War II. His biographer speaks of the high esteem with which Liddell was held in the Weinsen Camp. And what was the secret of his extraordinary leadership power, his joy, and his integrity in the midst of enormous hardship? The biographer quotes a woman who was in the camp at the time and with her husband knew Liddell well:
What was his secret? Once I asked him, but I really knew already, for my husband was in his dormitory and shared the secret with him. Every morning about 6:00 AM, with curtains tightly drawn to keep in the shining of our peanut-oil lamp, lest the prowling sentries would think someone was tying to escape, he used to climb out of his top bunk, past the sleeping forms of his dormitory mates. Then, at the small Chinese table, the two men would sit close together with the light just enough to illumine their Bibles and notebooks. Silently they read, prayed, thought about what should be done. Eric was a man of prayer not only at set times–though he did not like to miss a prayer meeting or communion service when such could be arranged. He talked to God all the time, naturally, as one can who enters the “School of Prayer” to learn this way of inner discipline. He seemed to have no weighty mental problems: his life was grounded in God, in faith, and in trust. (169)

If my private world is in order, it will be because I have chosen to press Sabbath peace into the rush and routine of my daily life in order to find the rest God prescribed for Himself and all of humanity. (172)

The Contrarian’s Guide to Leadership